I’m just back from attending the Oregon Government Finance Officers Association (OGFOA) spring conference in picturesque Seaside on the Oregon coast, about two hours northwest of Portland. The conference was held at the spiffy Seaside Civic Convention Center, which recently underwent a $15 million renovation.

The conference kicked off with a new member/first-time attendee afternoon orientation on Sunday, March 1, followed by a welcome reception. Over the course of the next three days, some 285 attendees enjoyed sessions such as: Best in Show – Avoiding Common Financial Reporting Deficiencies, Budget – Navigating Storm Waters, and Booster Seat to Rocking Chair Panel.

Among the 41 exhibitors in the vendor hall were familiar names such as Wells Fargo, J.P Morgan and PFM, and several northwest-based companies like Umpqua Bank, D.A. Davidson, and Columbia Bank. Several of the exhibitors had either attended our CSMFO conference in January or were familiar with their counterparts who work with local government in California.

On Monday evening, OGFOA held a banquet with musical entertainment provided by a great, high energy five-piece rock band comprised of OGFOA members. The thoughtfully selected set list included appropriately themed music such as Money by Pink Floyd and For the Love of Money by the O’Jays. This was the first time that the group had played together on stage after some seven rehearsal sessions over about a six month period.

My gracious hosts in Seaside were OGFOA President Kathy Leader, Chief Financial Officer of Clean Water Services, and OGFOA President-Elect, Ron Harker, Finance Director for the City of Roseburg. Much like our annual CSMFO conference, there was a changeover during the conference when Ron was installed as the new OGFOA president. Ron will be joining us next year as the Oregon representative at our San Jose conference.

Conference highlights for me included the powerful opening keynote session with Elisa Hays, an Americans with Disabilities Act advocate who shared her harrowing yet inspiring personal story of traumatic injury and the related aftermath as a result of a catastrophic motor vehicle accident. I also really enjoyed the general session with staff from the Oregon Public Employees Retirement System and, of course, the musical performance by the OGFOA rock star band. It was also great to have the opportunity to interact with OGFOA members in a relatively cozy setting and having the chance to get better acquainted with the presidents of our west coast sister organizations.

OGFOA’s conference theme was Staying the Course – Serving our Communities, and like our CSMFO members, I found the local government finance professionals at the OGFOA conference to be passionate about their commitment to public service in their communities. I also look forward to the opportunity to visit Washington and Alaska later this year as I attend their respective government finance officer conferences.

Finally, the local chamber of commerce describes Seaside as a place to relax, recreate, or contemplate the complexities of the universe. I suppose that my Oregon road trip allowed for a little of all of the above, and it’s a place I would definite like to visit again. For now, it’s back to work – staying the course, if you know what I mean. 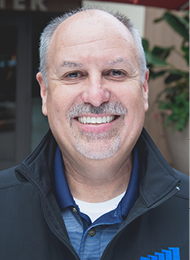 Steve Heide is the Finance Director, Chino Valley Fire District, Chino Hills, California. Over 30 years of professional finance experience, having worked in government and private industry in a variety of finance positions with progressive levels of responsibility. Previous positions in public accounting, healthcare and non-profit/government.